The term trigonometry originated from Greek words trigōnon and metron meaning triangle and measure respectively, and refers to a branch of mathematics that deals with the relationships between length of the sides and angles of triangles. This field emerged in the Hellenistic world during the 3rd century BC from the applications of geometry to astronomical observations. While the Greeks focused on the calculation of chords, the mathematicians in India created the earliest-known tables of values for trigonometric ratios, also called trigonometric functions, such as sine.

Throughout history, trigonometry has been applied in areas such as geodesy, architecture, surveying, celestial mechanics, astronomy, and navigation. 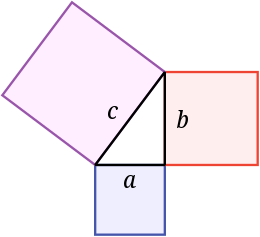 The Pythagoras theorem that is applicable to right-angle triangles is an important component of trigonometry, and according to it area of the square whose side is the hypotenuse (the side opposite the right angle) is equal to the sum of the areas of the squares whose sides are the two sides that meet at the right angle.

The theorem is named after the Greek mathematician Pythagoras (570-495 BC) who is credited with its discovery and proof, although it is often argued that knowledge of the theorem predates him and Babylonian mathematicians understood the formula.

The Pythagoras theorem is commonly utilised by architects, surveyors and engineers, and referred to as Rule of 3-4-5 by masons.

Though seemingly straight forward, using Pythagoras theorem is not all that easy.

It is important to note here that various civilisations in India as early as Sangam Period constructed dams, dikes, palaces and great cities. The great turrets in temples and great highways could not certainly be built without the knowledge and understanding of trigonometry, and basic engineering design of which Pythagoras theorem is an essential component.

Research has lately revealed that the length of the hypotenuse of a right-angle triangle can be calculated independent of the Pythagoras theorem.

You all would be surprised to know that an ancient Tamil mathematician and poet Pothayanar, who lived around 800 BC, had propounded the following quatrain depicting the method of finding the length of the hypotenuse of a right-angle triangle using the length of the sides, and simple fractions, without getting into intricacies of calculating square or square root:

English translation of this quatrain is as given below.

Divide the horizontal into eight,

Delete one portion, and add the remaining to half of the vertical,

The answer would be hypotenuse of the triangle.

There is distinct advantage of using Pothayanar theorem as one does not have to calculate square root of a number which is always cumbersome.

But then, before drawing any conclusion we need to undertake a few test runs  to better understand this formula.

Assume A, B, and C as being three sides of a right-angle triangle with C its  hypotenuse and A and B horizontal and perpendicular respectively. Always take longer side as being horizontal.

Dividing A into eight parts and dropping one part, we are left with 7/8 A.

Thus, according to Pythagoras theorem the hypotenuse is,

This really makes no sense unless we assign some value to A and B and then calculate C.

According to Pythagoras theorem,

Now, according to Pothayanar theorem

Above two examples must have convinced most of you, but then for convincing the doubters we take one more example.

According to Pythagoras theorem

According to the Pothayanar theorem

We may fail to acknowledge mathematical genius of Pothayanar but that in no way makes him a lesser genius than Pythagoras.

As a tribute, should we Indians not put forth Pothayanar theorem as an alternative to Pythagoras theorem?

If not anything else we can include Pothayanar theorem in the mathematics curriculum of our schools, and ensure that the students are aware of this alternative.

After the choice has been provided, it is upto the students to decide if they want to use it. They would certainly use it if they find it advantageous and easy as compared to Pythagoras theorem.